Why you must watch the Fatma Turkish Series of Burcu Biricik on Netflix?

Burcu Biricik's long-awaited Netflix Turkish series is finally on the air! Burcu Biricik, who has appeared in many different roles so far, will be on the screen this time as a serial killer. Attracting attention with the quiet but ambitious Kübra character she portrayed in Şeref Meseles Turkish Series, she did her best to get the man she loved in the Turkish Series Hayat Şarkısı, where she starred with Birkan Sokullu. Biricik, who won the hearts of the television audience, gave life to the character of Dila in the Kuzgun Turkish Series.
Burcu Biricik, who participated in the Red Room Turkish series as a guest actress and played in the memories with the character of Boncuk, finally appeared in the Turkish series of the same name. Adapted from Gülseren Budayıcıoğlu's novel Camdaki Kiz - The Girl in Glass, as everyone's pupil, diligent and kind-hearted Nalan.
The shooting of the Fatma Turkish Series, starring Burcu Biricik, finished months ago. Fans of the young and beautiful star have also been eagerly waiting for this Turkish series to be broadcast for a long time as soon as Fatma started broadcasting on April 27. Burcu Biricik has already become TT on social media. The comments made on social media emphasized the acting success of Burcu Bircik.
Her fans shared thousands of posts stating that the actor showed great performances with the character of Fatma and made the role believable and impressed them very much. In a short time, Burcu Biricik became the trending name of Twitter.
This time, Biricik, who appeared in the role of a cleaning lady, shared the leading roles with Uğur Yücel, Mehmet Yılmaz Ak and Hazal Türesan. The Story is as follows:
Fatma (35) is an ordinary cleaner. Zafer disappears shortly after her husband is released from prison. Meanwhile, Fatma, who sets out to search for Zafer, commits an unexpected murder.
With Zafer's dark connections learning about this murder, Fatma has no choice but to keep killing to survive. This situation becomes a ritual for Fatma, where she can avenge everything she has lived up to this day.
On the one hand, Fatma is a mother who wants to avenge her innocent son, whose husband she could not fit into the world. On the other hand, she continues to live as a "cleaning woman" that no one suspects of her in every murder she committed and begins to search for her husband.
Scenes that frightened those who saw the trailer, published with the slogan "Dust is sand, soil, but mostly human skin is dust", came to the screen.
An excited wait began for the series, in which Burcu Biricik played a completely different role. Those who watch the trailer also state that they are very curious.
The trailer of Burcu Biricik's new Turkish series made the audience have opposite corners with Bead in Red Room, Nalan in Girl in Glass, and then Fatma, which added excitement.
The psychological drama series directed by Özer Feyzioğlu and written by Özgür Önürme has appeared as the original Turkish internet series of Netflix.
Uğur Yücel, Mehmet Yılmaz Ak and Hazal Türesan also take part in the series, which was shot in July 2020, along with Burcu Biricik.
Barış Arduç was among the famous names who had the opportunity to watch the Fatma Turkish series. Arduç offered his congratulations to Burcu Biricik, who played a mutual role in the Kuzgun Turkish TV series, with the sharing he tagged. 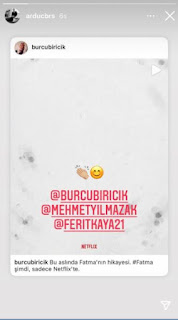 Nur Fettahoğlu, on the other hand, expressed that she was very impressed by the series she watched as an actress, with the words "Health to everyone's heart, wonderful" and with her applause emoji.
In the meantime, the actress made a professional confession and expressed her appreciation for Fatma with the words "Accepted. I'm a little jealous." 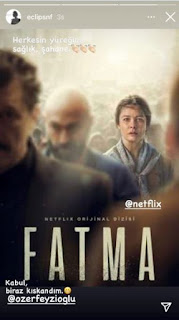 Again, one of the names who watched and liked the series was Uğur Güneş. Güneş, who left Çukurova once and prepared for the series Lawless Lands, posted a message on Instagram about Fatma, which he had the opportunity to watch, and labelled both Burcu Biricik and Özer Feyzioğlu, saying "Clean narration, clean acting." 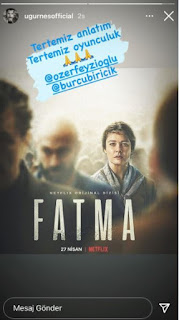